Celebrate both sides of your nature with this inspired handcrafted wooden Yin-Yan mandala «Tree of Life» on your wall.
Yin is negative, dark, and feminine, Yang is positive, bright, and masculine. Their interaction is thought to maintain the harmony of the Universe and to influence everything within it.
It is a concept of dualism in ancient Chinese philosophy, describing how seemingly opposite or contrary forces may actually be complementary, interconnected, and interdependent in the natural world, and how they may give rise to each other as they interrelate to one another. In Chinese cosmology, the universe creates itself out of a primary chaos of material energy, organized into the cycles of Yin and Yang and formed into objects and lives. Yin is the receptive and Yang the active principle, seen in all forms of change and difference such as the annual cycle (winter and summer), the landscape (north-facing shade and south-facing brightness), sexual coupling (female and male), the formation of both men and women as characters.
«The Tree of Life» is a popular and universal symbol that represents multiple different things across various cultures and religions. The symbol does not belong to one specific culture as it has been used all over the world for centuries.
«The Tree of Life» commonly represents the interconnectedness of everything in the universe. It symbolizes togetherness and serves as a reminder that you are never alone or isolated, but rather that you are connected to the world. The roots of the Tree of Life dig deep and spread into the earth, thereby accepting nourishment from Mother Earth, and its branches reach up into the sky, accepting energy from the sun and moon».
According to the Ancient Celtic Druids, the Tree of Life possessed special powers. When they cleared an area for the purposes of settlement, a single tree would be left in the center which became known as the Tree of Life. It provided food, warmth and shelter to the population and was also an important meeting place for high ranking members of the tribe.
As it also provided nourishment to animals, this tree was believed to take care of all life on Earth. The Celts also believed that each tree was an ancestor of a human being. It is said that Celtic tribes would only inhabit locations where such a tree was present.

There are no reviews yet. 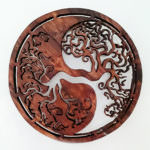